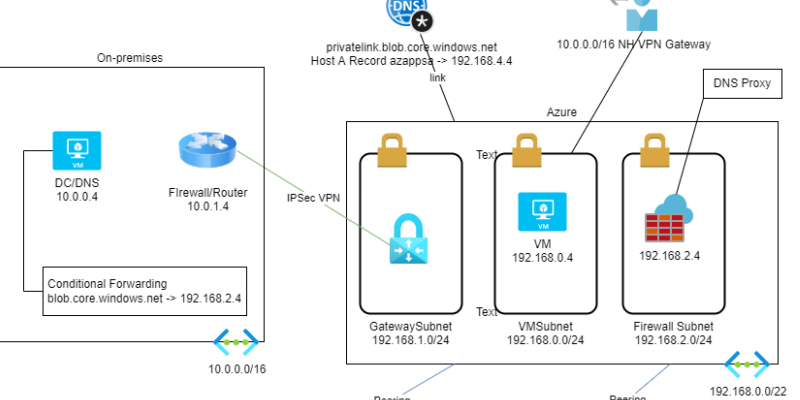 Designing the network routing, cloud & hybrid, on a Hyperscaler like Microsoft Azure can get a real pain. I got an idea, to start playing with some common scenarios and make some notes, in order to have it as a reference. I end up with three scenarios. Those scenarios are referring to internal network topology, without public access, and I focus more on the routing aspect, the DNS configuration & inspection through Azure Firewall.

At the start, I created the on-premises network, using a RRAS (Windows Server 2019 with Routing & Remote Access) to act as the router/VPN device and a Server with DNS service. The Azure estate has three VNets, in a hub & spoke topology. One HUB and two Spokes, connected with the HUB with VNet peering. There is no peering between the spokes. My Azure HUB network has three subnets, one has a VPN Gateway, the second has a VM, and the third has an Azure Firewall. In this first scenario, the Azure Firewall acts only as a DNS Proxy. It is not included in routing.

The first spoke has a Private Link to my storage account. The second spoke has a VM.. Azure VPN Gateway knows all routes of its VNet, the peered VNets & the routes propagated from the VPN connection. From on-premises, we can reach all resources using the VPN connection interface ( in RRAS I added a custom route “192.168.0.0 255.255.0.0 interface:AzureGW”)

First, we need to create a Private DNS zone and link it to the HUB VNET. For accessing blob storage we need a Private DNS zone with the name privatelink.blob.core.windows.net, for the file we need privatelink.file.core.windows.net. More services here. Then add the Storage Account Private Endpoint record to the Private DNS Zone. Now there is an A record azappsa with IP 192.168.4.4. Now, all Azure resources at the linked VNet, the HUB, are able to resolve the DNS records of the Private DNS Zone. We cannot resolve the records of the Azure Private DNS Zone from on-premises. To do so, we need a DNS server on Azure, to use as a conditional forwarder. This can be a Windows or Linux VM with DNS services or in my case, the Azure FIrewall with the DNS proxy enabled (I will use the whole functionality of the firewall to my next scenarios). I enabled the DNS Proxy on Azure, using default Azure DNS, and I added a conditional forwarding at the on-premises DNS “blob.core.windows.net -> 192.168.2.4” and “file.core.windows.net -> 192.168.2.44”. Now, I can successfully resolve the private IP of the storage account using its name, and be able to connect to it to both blob and to files with SMB access.

Please find below the whole solution diagram, I tried to make it as analytic as possible, without messing with too many lines. Also, I have some notes and tests below.